Hello,
One of the first preview of our upcoming KICKSTARTER campaign for RGG 360° an ergonomic handle for miniature painting on https://letempledemorikun.blogspot.com/
ORIGINAL FRENCH VERSION: https://letempledemorikun.blogspot.com/2018/11/critique-holder-rgg-360-by.html
QUICK TRANSLATION BELOW:
WARNING: I would like to point out that the product sent is only a PROTOTYPE, therefore very likely to evolve in the future (if it is not already done) and which will in any case be finalized AFTER the KICKSTARTER campaign if it is successful. I thank you, therefore, for accepting the present criticism, as I will of course accept your feedback, in the light of this important information. 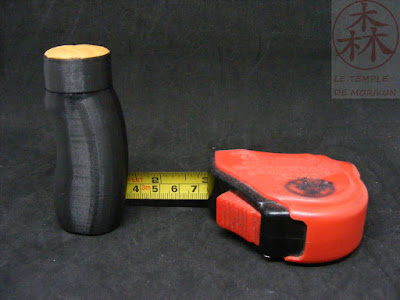 THE RGG 360 ° RING: A BEAUTIFUL INNOVATION

The first part of this RGG 360 ° preview by REDGRASS GAMES is coming to an end. I’ll have to go into a few usual painting sessions to be able to fully appreciate the ergonomics and ease of handling promised by this miniature holder. For the moment, I do not see any negative criticism to make … But if so, it will be by precisely detailed  … As usual in the Temple ^^

– the size neither too small nor too big for most miniatures (I will see if possible for larger pieces like monsters, cavalry … This format  excluding the treatment of pieces like a dreadnought or a tank.

– The rotating ring which is handled without effort and which allows to “switch” the subject to paint.

The points to be evaluated or preliminary reflections:

– Trying to fix very small elements like a head or an arm?

– the lifespan of the rotating system in case of  repeated painting session? (air brush).

I thank Vivien and the whole REDGRASSGAMES team for the confidence they are honoring me by asking me to review their next product.. Again, keep in mind that I have here a “simple” functional prototype: the final product should be much better and certainly more efficient ^^ Thank you very much,